Gorilla Moms: What They Can Teach Us About Breastfeeding

What They Can Teach Us About 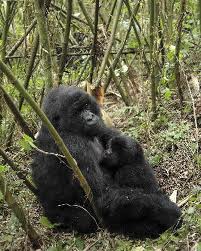 At the Memphis zoo, a human lactation specialist was hired for one of the female gorillas who had recently given birth (http://www.tmuffin.com/2011/08/lactation-consultant-for-gorilla.html). Zookeepers have learned that gorillas and apes raised in captivity, who have never seen other gorillas nurse their babies, need guidance to succeed at breastfeeding, and that humans can be the ones to teach them how!
In her popular book on breastfeeding, Janet Tamaro gives this account:

“At an Ohio zoo, a female gorilla lived by herself. It's hard to breed gorillas in captivity, but eventually this gorilla was courted, won over, and impregnated by a visiting male. When her baby was born, the gorilla did a terrible thing that mother gorillas do if they haven't been taught a particular skill. She killed her baby.

“She killed the baby because she didn't know how to feed him. Gorillas will do one of three things after they give birth. Their first choice is to breastfeed. If they don't know how to breastfeed, the gorilla world gives them only two other options: let their offspring starve, or kill them...

“When this gorilla became pregnant again, her keeper knew she needed help to avoid a repeat performance. Somehow, he had to teach her how to breastfeed her baby...But how?”...He called the La Leche League and each day a nursing mother came to the zoo and fed her baby in front of the gorilla...For days, the gorilla couldn't have been less interested. She fished fleas off her fur, scratched her behind, made faces. But as day after day went by, and new La Leche League mothers showed up with bare breasts and babies, the gorilla got more and more interested. Finally, when it was close to her due date, she had her nose pressed up against the bars of her cage to get a better look.

"But when her baby was born, she acted like a typical new mother. She'd forgotten all that she'd learned...She still didn't have a clue on how to hold  the baby or how to get it to latch onto her breast. The baby was crying. The gorilla mother was obviously agitated...

"Her keeper feared for the infant...so he called the La Leche League again...Quickly, the League sent a mother out to the zoo. She stood in front of the bars and attached her baby step by step. She brought her baby's chest to her chest, slowly cradled the baby's head in her left arm, held her breast with her right hand, and tickled the baby's lips with the nipple to get the baby to open his mouth. Then she pulled the open-mouthed baby toward her breast and with one rapid arm motion, got the cooperative baby quickly onto her breast. The gorilla watched, mimicking the moves step by step until, with a nearly audible sigh of relief, the gorilla looked down at her chest and saw her baby feeding happily for the first time. When she had another baby, she didn't need any help from the La Leche League" (Tamaro, 1998, pp 37-38).


Knowledge is Power! It changes what

we do, how we think, and who we


An article in the Journal of Social, Evolutionary, and Cultural Psychology, said a survey about great apes in captivity, showed “18% of all maternal infant care failures (i.e., death or human intervention) are the result of flawed or absent nursing” (Abello & Colell, 2006 as qtd by Volk, p 306).

Evolutionists say it may be that the human need for education is due to a “trade-off between the reliability of innate behaviors and the flexible power of a learning brain”, and that our “heightened intelligence... has greater learning requirements... and an increased reliance on learned behaviors such as maternal nursing” (Volk, 2009, p 306, 309).

Primates and humans are altricial, that is, they are helpless at birth. They require greater parental investment, commitment, communication, and care for a longer period of time. Parents are able to pass on more knowledge and skills, which leads to a greater social support system, thereby increasing their progeny's chances of survival and learning.  This social system became a necessary part of human nature and human civilization as humans became interdependent. Social support is essential to social beings. We need to ask for and accept help and education.


Asking for Help
Parenting, like breastfeeding, is not always easy, especially if you don't have a successful and current role model that can help you as you need it and are ready for it, like the gorilla mother at the Ohio zo. It is important that you reach out and search for answers from those who know. In the case of breastfeeding, lactation specialists are available and can be located through your hospital or pediatrician, or on the internet. It doesn't mean you are inferior or defective that you need to ask for help, it means you are human. As the science and our gorilla mothers have shown, sometimes the trade-off for greater intelligence is a greater need for education. If you are having trouble breastfeeding, or any other parenting issue, seek for help before small problems become big ones. True knowledge can make all the difference.


References
Tamaro, J. (1998). So that's what they're for!. Holbrook, MA: Adams Media Corporation